Being a former Long Drive Champion affords me the ability to brag about prodigious drives and it’s not a fish story, but how far I used to be able to hit a ball is not what this story is about. This is a story about how The King created a pair of lasting moments in the life of a fairly unknown golfer and showed what kind of person he is.

The year is 1995. I had moved on from Long Drive and was attempting to make The PGA Tour. I was in the middle of my best golf having had a few brushes with success that would have propelled me to The Tour. I was on the range at Indian Wells the week of The Bob Hope Classic, testing drivers from the Cleveland Tour van, as I had just signed an endorsement deal with them. The tour rep (who has also since passed on) was handing me different specs and it was fun…I had a PGA Tour range all to myself. I was feeling pretty good about myself and remember thinking, “How does it get any better than this?”

Get me an Old Milwaukee.

The range at Indian Wells was straight uphill and there was a rock at the top, then a wall of bushes, then the mountain. Only the longest hitters could get near the rock in the day of small steel heads and balata golf balls. It was rumored that John Daly had flown the rock and hit balls into the bush line.

As I am hitting balls, I sensed someone had walked up as I was about to hit. I hit a nice ball just over the rock into the bush line.

“Haven’t seen anyone do that in 40 years of coming here.”

I recognized the voice and it was Arnold Palmer himself. The Cleveland Rep introduced me and I was obviously thrilled. After a few short pleasantries, The King asked me to hit some more balls. Imagine the thrill, The King was impressed by me and wanted to watch me do more. I hit a few more of the same, then he said, “Can you hit it out of the range, it doesn’t look like you are swinging that hard.”

I said I could and hit the next one over the bushes. Don (The Cleveland rep) then said, “OK Monte, really hit one!”

“Really hit one?” says The King.

I gave it all I had and with some obvious adrenaline pumping for who my audience was, I hit one that was likely one of the 5 longest balls I have ever hit. The ball flew well over the rock and the bush line and landed in the rocks well up the mountain considerably out of the range.

“Holy Shit, the rest of the golf world better hope you can’t putt!!!!!”

I thanked him for taking time to humor me and inflate my ego, he laughed and told me how fun it was to watch.

Fast forward 6-7 years. I was caddying for a good friend in a Champions Tour event and who does he get paired with?

I had no intent of troubling him with our prior meeting, as I am sure that although that was the highlight of my career as a golfer, for him it likely ranked three rungs below a missed 4 footer on 16 during the 1958 Zipper Open.

We are on the first tee and as he’s folding his pin sheet and putting it in his yardage book, he walks over to the bags to introduce himself to me the other caddie in the group. He looks up at me and there is a sign of recognition. He ponders for a split second and says, “I saw you hit one over the mountain at Indian Wells!”

He then does a 30 second recap for those on the tee and the several dozen fans surrounding the tee.

I don’t get teary eyed about many things, but when the world loses a man who was that renowned and gave a crap about me enough to remember…that was enough for me to get a huge lump in my throat and well up when I read the news.

People show reverence to Ben Hogan by calling him Mr. Hogan. The man we lost yesterday created so much reverence, he allowed us all to call him Arnie.

Don’t Grind the Gears When You Swing a Golf Club 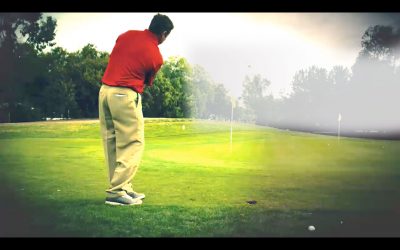