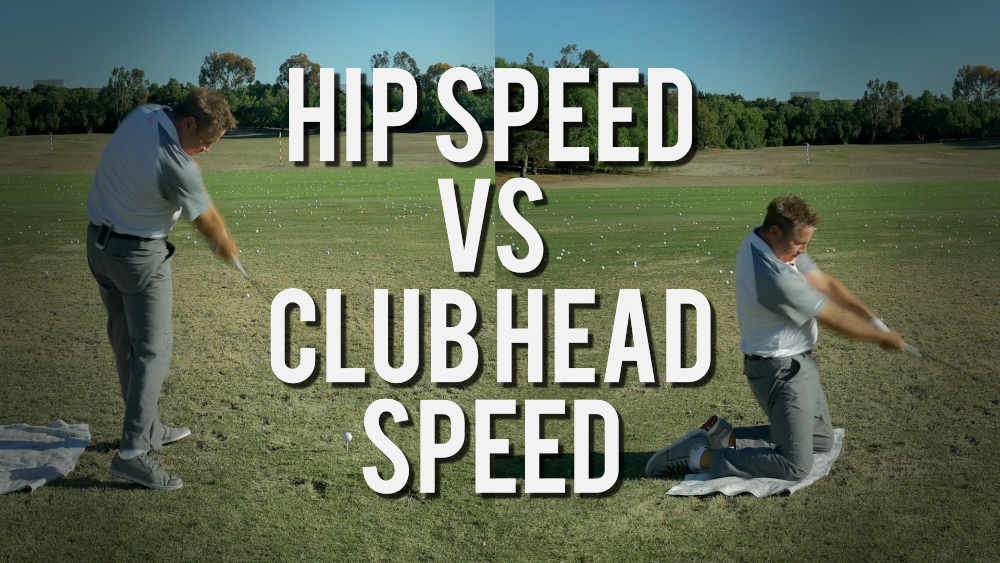 Many people believe that faster hips in the golf swing will increase club head speed and produce longer drives. The reason for this line of thinking is understandable and fairly logical: If the hips turn faster, the club ought to come with it at a higher rate of speed. However, as I’m about to explain, this is not actually true. Golf is difficult because it rarely makes logical sense. This is another one of those instances. 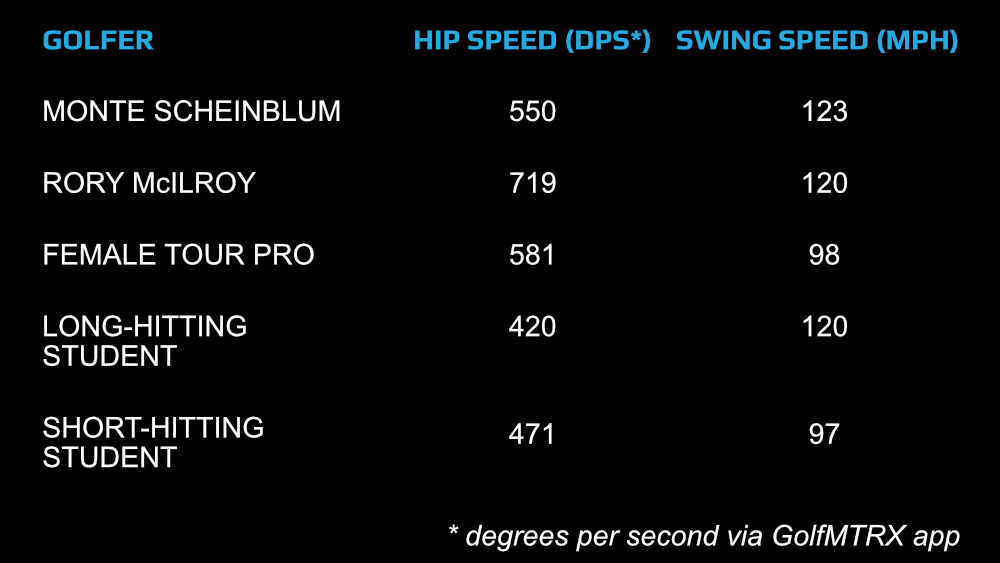 The relationship between hip speed and swing speed varies a lot from golfer to golfer. The female pro I worked with had 50 more degrees-per-second of hip speed than me, and yet my swing measured 25 mph faster than hers. Rory McIlroy’s infamous hip turn measures as fast as it looks, and yet his swing speed isn’t much different than mine. Finally, take a look at my short-hitting student. He’s a strong linebacker-type with a pretty forceful hip turn. His hip turn speed is 50 degrees-per-second faster than my long-hitting student, but his swing speed is nearly 25 mph slower.

WHAT DO THESE NUMBERS SAY?

There is obviously not a clear correlation between hip speed and swing speed from one golfer to another in this group. Some golfers have fast hips and relatively slow swings. Others have fast hips and fast swings. And still others have relatively slow hip speeds and high swing speeds. Based on this data, we can at least say that there doesn’t appear to be a correlation between hip speed and club head speed within this group.

But Monte, that doesn’t mean one of these golfers couldn’t increase their swing speed by increasing their hip speed

You’re right. These numbers on their own, don’t say anything about how a change in hip speed might impact these individual golfers’ swing speeds. But the following video does:

Here’s a somewhat infamous excerpt from my instructional video DRIVE 4 DOUGH. Here I test the relationship between hip speed and swing speed by hitting a ball off my knees:

For those that didn’t watch, at roughly 50% hip speed, I retained approximately 90% of my swing speed when hitting off my knees. In other words, cutting my hip speed in half had a relatively tiny impact on my swing speed.

THIS VIDEO IS CONTROVERSIAL

A lot of people don’t like this video. It’s at odds with their understanding of how the golf swing ought to work. For some, it’s also a challenging test of viewing comprehension. I’m going to use the most common complaints I’ve received about this video as talking points below:

You’re a freak. Most golfers wouldn’t get that result.

Actually, everybody whose ever taken this test on my lesson tee ends up with similar results. And given how controversial this concept is, I’ve had dozens of people come to me to take the test. Sometimes the ratios are a little different, but the overall affect is identical: Big reductions in hip speed have negligible affects on swing speed.

I have a body-driven swing, so my results would be much different

Want to put money on it? I had a student come to my lesson tee specifically with this argument in mind. He was certain that with a “pivot-driven” golf swing, he’d lose a lot more swing speed off his knees than I did. And yet, he lost over 80% of his hip speed, and only 20% of his swing speed. He was floored.

People who watch this are going to get “arms-y” with their golf swing, because that’s what you’re saying to do

I agree. But this video has absolutely nothing to do with the lower body being unimportant. Anybody who follows me knows I devote plenty of attention to the lower body. In fact, I spend roughly half of my video DRIVE 4 DOUGH focusing on how the lower body works in the golf swing. And since the embedded clip above comes from that video, you should probably rethink that statement. As I explain fully in DRIVE 4 DOUGH, hip speed is critical to determining the direction of the speed the arms generate in the downswing.

Okay, so what’s the point? Why even make this video?

Let’s start with a google search.

In short, there are hundreds of articles and videos out there advocating for increased hip speed to generate more distance in the golf swing. What I am saying is, these articles are wrong. When it comes increasing your swing speed, speeding up the hips is not the way to do it. Trying to turn the hips faster isn’t going to make you hit the ball further.

So fast hips are bad?

Not necessarily. Fast hips, on their own, aren’t really good or bad. Hips that outrace the arms in the downswing are bad, but fast hips on their own aren’t necessarily a bad thing. It really depends on the hip turn’s relationship to the overall sequence.

The key to understanding this lies in the kinematic sequence. Take a look at the chart below:

These readouts measure the speed of various parts of the body over the entire sequence of three golf swings by three different golfers. The chart on the left is for a pro golfer, and the middle and right charts are for amateurs. The vertical black line for each chart denotes impact. The basic takeaway is this: in an optimal swing, (pro on the left), first the pelvis speeds up, and then it slows down as that speed is transferred to the thorax. Then the thorax reaches it’s maximum speed, and slows down as the left arm peaks. Finally, the left arm slows down as the club head speed peaks right at impact. The two amateurs don’t have the same sequence, and in turn, they don’t create the club head speed of the pro

Here is where this entire discussion starts to make sense. First of all, note that the absolute peak speed of the pro’s hips is barely higher than amateur #1, and actually slower than amateur #2. But much more importantly, look at the pro’s pelvis throughout the swing. It peaks first, and then declines as that energy works its away out to the club head. Amateur 1’s hips (MIDDLE) basically flatline throughout in comparison. Amateur 2’s hips are the most interesting. Not only do they achieve the overall fastest reading of the three golfers, but they continue to accelerate through impact. Despite this, AMATEUR 2 creates the slowest club head speed of the three golfers. In short, Amateur 2 has the fastest hips, and the slowest club head speed.

WHAT DOES THIS TELL US?

In an optimal swing (left), the hips peak early and actually slow down throughout the rest of the swing. More specifically, fast hips (Amateur 2) accelerating throughout the swing and peaking at impact DO NOT CREATE FAST CLUB HEAD SPEEDS. Remember, the ultimate goal here is club head speed. The pro sequence on the left creates a slingshot of extreme club head speed that peaks at impact. And the pro’s hips actually peak at a slower overall speed than one of the amateurs (amateur #1). And yet, the pro creates 33% more club head speed than either amateur.

IT’S ABOUT THE SEQUENCE

As I said earlier, the issue is not that fast hips are good or bad. What really matters is where the hips peak in the kinematic sequence. Fast hips that are poorly timed do not create club head speed for the amateurs, because it disrupts their optimal sequencing. Added to that, all three golfers have similar max hip speeds, but the pro’s club head speed is 33% higher. The pro’s sequence optimally builds and transfers energy. It starts with the hips, then the torso, then the arms, and finally, the club head. The energy this sequence transfers to the club head blows away the amateurs. In many ways, the kinematic sequence chart is an objective measurement of my effort vs speed argument. Increased hip speed might feel powerful, but it doesn’t accomplish the goal of higher club head speed. Amateur #2 is actually producing the fastest hip speeds, but the effort is misplaced. It doesn’t create more speed.

SO SHOULD I INTENTIONALLY SLOW MY HIPS DOWN?

Like my bump, dump & turn concept, the point of the kinematic sequence is not to try to deliberately achieve every step as it happens. The downswing is too fast. It would be impossible to consciously time each body part on the way down as you go. More generally, understanding the kinematic sequence is about understanding what actually creates club head speed in the golf swing. So yes, I have had students who gained club head speed by deliberately slowing their hip turn in the downswing. Doing so got their arms better linked up with their turn. This allowed them to transfer more energy to the club. But I am not telling everybody to slow their hips down. That’s not my point. My point is, faster hips don’t create faster club head speeds. High club head speed is the byproduct of a well-sequenced swing that transfers energy from the pelvis on out to the club head in an optimal way.

Teaching golf consists of taking what we objectively know happens in a good golf swing and converting that into actionable thoughts (or “feels”) that produce desired outcomes. A good teacher can improve a student’s kinematic sequence by fixing what isn’t working.  But the concept of increasing hip speed to increase club head speed is rampant in the teaching industry. And as I’ve demonstrated here, it’s not correct. Faster hips can actually slow down your club head speed. At minimum, they have little to do with what actually produces club head speed in the golf swing. That doesn’t mean the hips aren’t important. For a fuller understanding of the role of the lower body, check out my video DRIVE 4 DOUGH.