Your Backswing is Probably Too Long 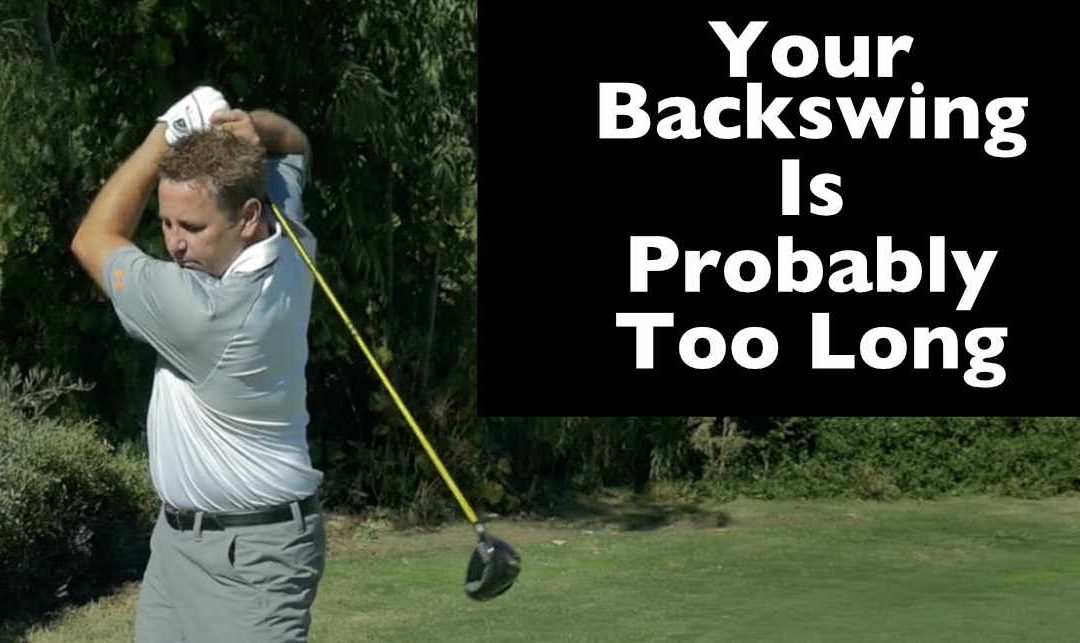 I SEE BACKSWINGS THAT ARE TOO LONG

Almost every golfer I see has a backswing that is too long. In general, the higher the handicap, the greater the chances that their backswing is too long. There are a number of causes for this. Trying to complete the turn and other similar cliches are one cause. I have often stated that a golf swing is always going to be somewhat individualized, due to the unique physical makeup, body type, and skill level of a given golfer. But when it comes to backswing length, there are very few golfers who can get away with a massive backswing and produce an optimal downswing in response. For the vast majority, shortening their backswing will produce much better impact conditions, greater distance, and a better overall motion.

GETTING TO PARALLEL IS AN ARBITRARY GOAL

For those that aren’t aware, “getting to parallel” is when the club is parallel with the ground at the top of the backswing. Some great players get there (or even past it), others don’t. Most don’t need to. More importantly, most will do much better with a shorter backswing. By much better, I mean that they will hit the ball a lot further and with much better control.

BUT A SHORTER BACKSWINGS FEEL POWERLESS!

I hear this all the time on my lesson tee. And I understand. Those of you used to stretching your body to it’s absolute limit every time you swing the club are going to feel like you’re barely taking the club back with a shorter back swing. But feel is not real. You don’t generate speed in the downswing by taking the biggest backswing possible, especially when doing so puts your body and the club in a terrible position in the backswing. If you need more convincing about just how poor our perception of the backswing can be, take a look at this drill. That drill, (the no-turn cast drill for those following along) has improved the backswings of nearly every golfer I’ve ever shown it to, and yet it is based around the “feeling” of not consciously turning the body in the backswing.

I have worked with many students who show up with a long, sloppy arm swing that produces 80 mph of club speed and 110 mph of ball speed. For those unfamiliar with those terms, that’s slow and short. I tell them that their backswing is too long. I have convinced them to shorten their swings, and even worked through the “but it feels powerless” phase by showing them the before and after of this change on a launch monitor. It isn’t uncommon for them to instantly go to 95 mph of club speed and 140 mph of ball speed. That’s an extraordinary increase in distance, simply by shortening the swing. “It feels powerless” tends to fall to the wayside pretty quickly when they’re hitting the ball 25 yards (or more) further.

The key is figuring out how to sync your arms swing with your shoulder turn. For most golfers, it’s easier to improve this by focusing on one aspect of the backswing as opposed to thinking of it as two separate parts. Or, as I demonstrate in the no turn cast drill, most golfers instantly improve their backswings by focusing on setting their wrists and letting their bodies react to that.

For some people, especially those with old injuries or mobility issues, the optimal backswing might stop when the left arm is parallel to the ground. That might sound really short and powerless, but I have many students who can pound the ball from that position. One of the keys to a good backswing is putting yourself in an ideal position for the arms to accelerate through the ball. That’s why massively long arm swings are so bad. Most people cannot get from the top back to the ball by accelerating. They’re too out of position due to the poor backswing, and will have to make compensations on the way down that put the brakes on building speed on the way down.

And for a tiny number of golfers, getting all the way to parallel may be optimal. But for most, that backswing is too long.

If you’re interested in a comprehensive video covering all of my keys to making a perfect backswing, check out my video Drive 4 Dough.

What is the world coming to?

When to go for it