The No Turn Cast Drill 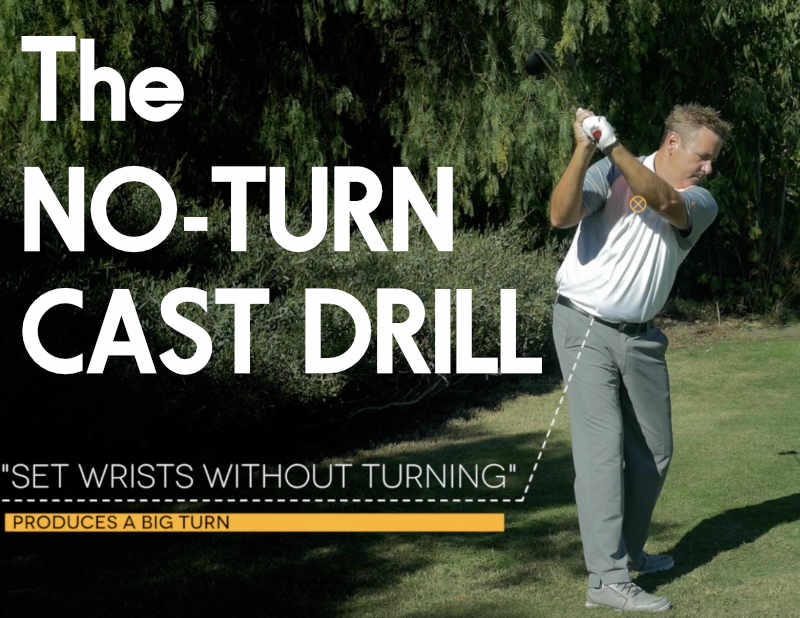 The No Turn Cast Drill has proven to be one my most useful and controversial teaching concepts. The video I’ve embedded here is the original No Turn Cast Drill. For those interested, I go into much greater detail about this drill in my video series DRIVE 4 DOUGH. The video also looks a lot better in that version.

The concept of the No Turn. Cast Drill remains as simple as it was the day I originally uploaded the video: Many golfers conflate making a proper turn with arm runoff in their backswings. So telling those golfers to set the wrists on the backswing “without turning” results in a perfect turn and a much improved wrist set. Part two of the drill concerns a separate but equally confused feeling: When told to cast the club at the ball from the top, most golfers actually produce shaft lean at impact. This happens because trying to cast paradoxically speeds up the arms, resulting in better impact conditions, despite the effort to make them as poor as possible.

More generally, the no turn cast drill is a great example of the saying, “feel is not real.” What we think we’re doing, how we feel we’re moving, and what we actually are doing, are often very different in golf. Sometimes our perceptions of what is “correct” and how it should “feel” have nothing to do with one another:

Today’s post is going to be quite mind numbing. Lots of technical data, domino effect of swing faults and an incredulous, counter intuitive solution to some very common swing faults.

“Feel isn’t real” personified and to the nth degree.

The golf swing being nearly 100% counter intuitive, this is something I have been suggesting to people. Now it’s not even close to what’s supposed to happen, but the feels produce wonderful results.

i.e. the exact opposite of the title…a huge turn and all sorts of shaft lean.

In this era of making a big turn, completing the backswing and lag, everyone over rotates to the inside, over runs the turn with the arms, yanks the handle, gets stuck, upper body moves laterally, steep, stall, flip, warped political and religious beliefs, tax evasion and bad breath.

Golfers fall into two categories with wrist set and turn.

1. Those who set their wrists in reaction to a turn.

2. Those who turn in reaction to the wrists setting.

This mismatch creates all the problems that amateurs lament across the world. Whipping the club inside, late arm lift, arm over run, over the top and cirrhosis of the liver (from drinking too much after your swing drives you to the bottle).

When I compare the videos, they turn shoulders 10-15 more degrees in the no turn swing and most of it happens by the time the left arm reaches parallel to the ground…and the angle of the shoulder turn is better and more perpendicular to the spine.

Result…shorter backswing with a bigger turn and the arms and hands in front of the turn…which is huge.

Guess why? A large majority of the population perceives turn as arm swing from a feel standpoint. So when they are instructed not to turn, the body reacts to the wrists setting by turning, which the arms move very little. Make no mistake, you aren’t supposed to restrict the turn, you just aren’t consciously making the turn and allow the body to turn itself in reaction to the wrists setting.

Think it’s just hackers? Two time PGA Tour winner Frank Lickliter was getting his arms behind his turn and didn’t know how to fix it. This feel worked for him.

So with a strange sounding feel in the backswing, we have eliminated takeaway too far inside and arm over run. This likely also eliminates reverse tilting at the top of the swing. Before we have even started the downswing, three big root causes that lead to a huge percentage of casting swings.

Yanking the handle, leading to the upper body reacting by moving toward the target, steepening the angle of attack and forcing the body to cast the club to keep from digging a grave…being the root cause of most of the other casting swings.

Casting is almost always a result of a swing too long, a steep angle of attack (Reverse tilt and upper body moving toward target cause this) or the arms trailing the turn…or some combination therein.

So now on to part two of the swing. Cast it from the top on purpose. I can hear and feel all of the lagists having their heads explode. Guess what this often results in? The right arm speeds up and linking the arms up with the turn/pivot. The turn reacts by speeding up which doesn’t allow the club to cast and you end up with shaft lean and an elimination of many of the root causes that result in the loss of shaft lean.

Like everything in the golf swing, these “feels” won’t work for everyone, but they have worked for more people than would make logical sense, but then the swing isn’t logical, is it?