False Turn and Loss of Tilt in the Backswing 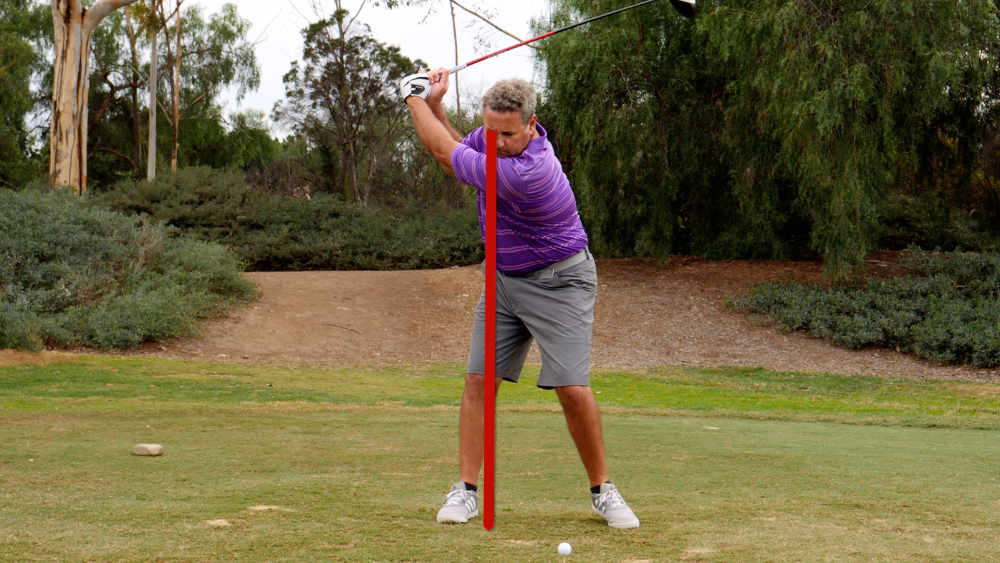 Many golfers lose tilt behind the ball when attempting to make a “full turn” in the backswing. The issue arises mostly because many golfers have a desire to make a turn in the backswing that they are not actually capable of making, due to physical limitations. When golfers try to make backswing turns they can’t properly manage, then end up losing their tilt or even tilting towards the target. Like many aspects of this game, “more” of something good is too often seen as desirable, even if trying to get “more” or “as much as possible” ends up compromising the swing. I have written at length about this issue here.

I refer to losing tilt in the backswing, or tilting towards the target, as “false turn”. Take this golfer on the RIGHT, for example: 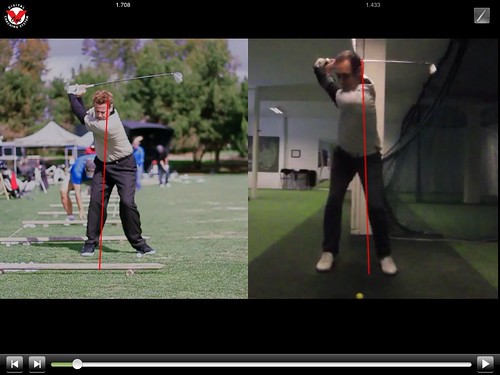 On first glance, it might appear to some that he has managed to make a 110 degree shoulder turn in the backswing. But in actuality, he actually only turned his shoulders 75-80 degrees. The remaining 30-35 degrees of “false turn” are a result of him tilting towards the target and losing some of the tilt he had at address. Compare that with yours truly on the LEFT. You’ll notice that I have maintained my tilt while completing my turn.

WHY FALSE TURN IS BAD

The common teaching concept of “turning your back to the target” is notorious for creating false turn. Losing tilt in the backswing by tilting towards the target is extremely detrimental to the downswing, because maintaining tilt away from the target:

AN ASTUTE OBSERVATION FROM A READER

In a previous article, I posted the comparison image above and asked readers for comments about the difference between the two positions. One astute reader responded:

The golfer on the right has no tilt behind the ball. He has turned in a way so that his front shoulder is turned towards his front foot instead of his rear. It seems like to me in an effort to make a full turn and get his club to parallel at the top, he has turned so far as to pull himself target-wards. From this spot he would have to make a massive move with his lower body to get himself unstuck from this position. All of the speed and power in his swing would be gone before he got anywhere near the ball. I would also venture a guess that this golfer would start to run out of room to turn by the time he gets near impact since he has to unwind a lot just to get to a spot where he can swing freely.
Monte on the other hand has turned in a way to keep his secondary tilt, notice the spine angle away from the target and has turned his lead shoulder over the rear foot. This would allow space for his arms to fall and as he leads with the lower body he creates more room without losing speed. Like monte says, do nothing to slow down the arms.

This is exactly correct. Let me unpack it a little more:

If you have false turn in your backswing and tilt toward the target, chances are high that your arms with also move past your turn. In other words, “false turn” with the arms, where the body isn’t actually turning but the arms continue to move back in a futile effort to get to parallel at the top. This problem, plus the steep angle of attack that tilting toward the target creates, makes producing lag impossible. From the top, the subconscious brain/body, has two choices:

I don’t think I need to explain why neither of those are particularly desirable. Most people who do this move have learned to do #1, because that allows them to hit the ball and actually play golf. But guess what happens when many of them see their swing on video?

This is the sort of disastrous thinking that leads to outcome #2: trenches, shanks, massive divots. All in a misplaced attempt to force lag into a golf swing that cannot naturally produce lag because of false shoulder turn. Fixing the shoulder turn is the actual solution to this problem. Fix that, and the lag and shaft lean will come automatically as a result.

Here is a secret to fixing this:

Try to get the right shoulder closer to the back foot in the backswing.

In the picture above, the vertical lines are actually making the right shoulder. Look at mine in relationship to the back foot (left) vs. the golfer on the right. See the difference?

Even Stack and Tilt guys don’t get their right shoulder as close to the left foot as the reverse tilters do. Getting the right shoulder over the right foot (left and left for lefties) keeps your tilt behind the ball. And that allows you to produce a shallow AoA in the downswing. It also makes it almost impossible for the arms to overrun the turn at the top of the backswing. Do this, and you will create plenty of lag. 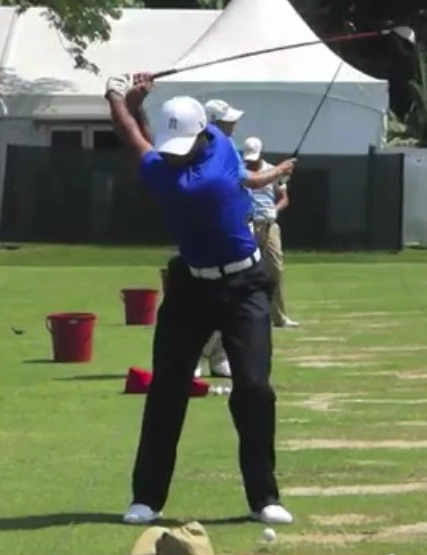 Look at is picture of Tiger above. Look how his swing, body tilt, arm, and right shoulder positions at the top are like mine: Balanced and powerful. Especially look at similar arm positions and how the right shoulder is much closer to right foot than the left. This is him practicing a “centered pivot” swing and yet his right shoulder is behind the center of his feet. 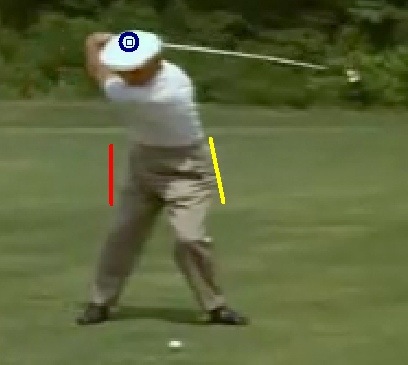 Tiger, Hogan and myself produce 90 degrees or more of shoulder turn while keeping the arms left of head at top of swing in a face on view (and no, I am not comparing my game to theirs, just my right shoulder position). Lots of leverage, room to create speed, and a shallow angle of attack: Lag city with no handle yanking, float loading or holding the angle. This position should be the Holy Grail of Golf Instruction.

Now, all golfers are going to have a slightly different look at the top while doing this. Most are going to produce less turn than they would expect. This doesn’t matter. Producing a smaller degree of “true” turn as opposed to false turn is exponentially better in every possible way. No matter how short this backswing may feel to some,  it puts golfers in an ideal position at the top.

For more on this subject, go HERE.

Reverse tilting from over rotating the shoulders