Time for another petty rant by me.

(Tomorrow I am going to have another swing of mine and compare it to last weeks in context with what I am working on.)

Let me be clear. I feel I have some very good and educated OPINIONS about a more simple approach to the golf swing and playing the game. My opinions have helped some people so far.

I am sick and tired of all of the so called experts out there stating their opinions as facts, people are following it and ruining themselves.

I was at the range on Friday and I saw two people hitting balls. One I call “the victim” and the other is a guy who I have gotten several emails about.

I have video on both. The first guy I am in no way making fun of him. I feel sorry for him. He has obviously bought into every facet of modern golf culture. You could tell he had about a 15 step swing check list just by watching his routine. He also used several training aids. You will see him practice holding the lag, swinging inside/out, trying to get in a “sit down position” (also known as a dive) and of course the scratch finish that needs to be held for at least 5 seconds and he held a few of them for over 10 when he hit one good. He also had a set of Mizuno muscle back blade irons.

I should also mention that he shanked 15 of the first 20 shots he hit, many of them short pitches of about 20-30 yards. When you dive, swing inside/out and hold the lag you are going to shank the ball….DUH!!!! I wanted to yell, “release the club” at him.

The second video is a guy who claims to hit 300 yard drives with his “revolutionary swing.” He was soliciting others to come watch, listen to him and talk about how he hits it farther than Tiger. I will just say this…I do not hit 2 iron 300 yards.

I also don’t want to leave out another duck hitting balls next to me. A 3rd party saw me hitting the ball well and asked me some questions and of course…I am always very verbose with my opinions :-). The duck finishes his bag of balls and as he is walking away says, “It’s kind of hard to practice with you talking so much.”

The guy who solicited my opinion told the guy off. If was pretty funny.

This story reminds me of the time where a guy told me to stop hitting driver because the loudness of my contact was making it difficult for him to concentrate.

I am going to have a petty rant on Monday 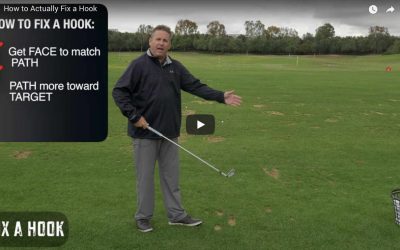 How to ACTUALLY Fix a Hook