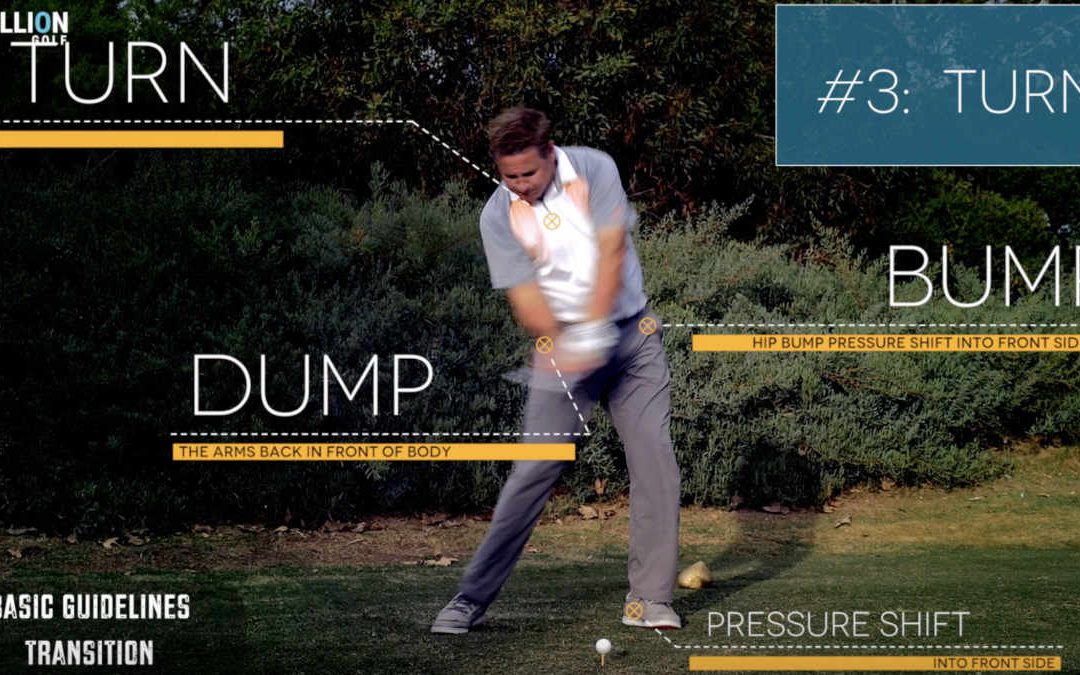 Those of you who have watched my video Drive 4 Dough are familiar with my concept of bump, dump, and turn when discussion the transition. For those who have not seen it, this article and video are a great place to start.

THE TRANSITION: WHERE GOOD BACKSWING GO TO DIE

All that said, the transition has an enormous influence on what happens at impact. And for those that may not have heard the term before, the transition is the point in the golf swing where you transition from the backswing to the downswing. It’s a critical piece of every golf swing, and a common place where good back swing go to die.

The video at the bottom of this article is all about my description of what happens in a good transition, and will divide you into two general groups:

1. The ones who love it and either work on this already…or are going to immediately go out there and work on it.

2. Those that don’t agree with it.

Group #2 will actually get the most benefit from it, because they have bad sequences..and most likely suffer from one of the problems below. 😀

If you can improve your transition to incorporate some form of this video properly, it will eliminate:

ONE LAST THING: UNDERSTANDING VS ACTION

The last thing I’ll say before you dive into the video: as I discuss elsewhere and in Drive 4 Dough, there is a difference between using what’s described in this video as an objective guideline for what happens in a good golf swing transition, and consciously trying to do all three parts. This is a much larger discussion that I will describe in greater detail elsewhere, but in short:

Most people won’t be able to consciously, bump, dump, & turn on command, and frankly, most don’t need to. A more common approach would be to assess your swing and discover, for example, that your transition is out of sequence. You bump, turn, and dump, so to speak. This is the classic “arms trailing the body” malady that I discuss endlessly on this blog. So for that golfer, the way to use the concept presented in this video would be to focus on dumping sooner than feels natural to them, because they are dumping after their turn is well underway, and need to reverse that portion of their sequence.

Will have some great new videos after Jan 1