The Lost Art of Lifting the Front Heel in the Backswing 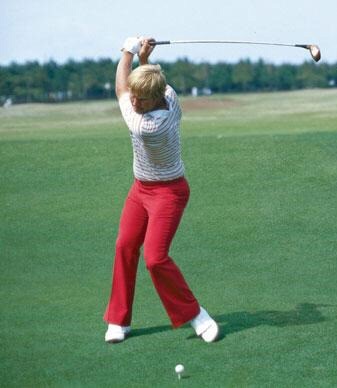 Once upon a time, most good players lifted their front heel in their backswing. Doing so allowed them to create a full hip turn, particularly if they weren’t flexible, or as flexible as they once were. Then one day, along came the concept of X-Factor, and suddenly restricting the hip turn in the backswing became the norm. And while thankfully, the most egregiously awful aspects of X-Factor have largely moved on, raising the front heel raising in the backswing remains pointlessly out-of-vogue.

Now, I’m not arguing that everybody should start lifting their front heel in their backswing. It’s not a miracle cure and can even cause problems for a minority of golfers. Like most isolated pieces of the golf swing, just lifting your heel is not going to be the miracle cure you seek. What I’m actually arguing is that, if you feel compelled to lift the front heel in the backswing, you should do so. In other words, it’s not about lifting the heel so much as it’s about not forcing the heel down, especially if forcing it down limits your hip turn in any way.

Golfers should allow their bodies to make the most of their range of motion when turning the hips, and many (if not most) will lift heel in the process of doing so. I discuss this at length (along with basically everything else about the importance of hip turn in the backswing) in my video DRIVE FOR DOUGH.

And for those keeping score, I define a correct hip turn as a turn that is perpendicular to the spine, not too flat, and maintains a semi-centered pelvis without moving too much toward the target and locking out right knee. Or to put it more simply:

How to ACTUALLY Fix a Hook