The 68 Ballerina Move: Scourge of the Modern Golfer 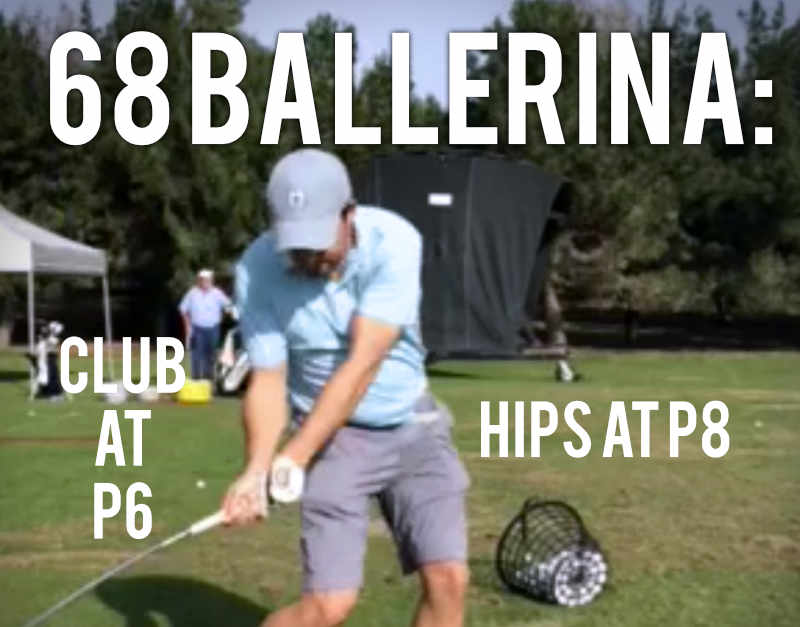 WHAT IS THE 68 BALLERINA POSITION?

I literally see more than half of my mid to low handicappers (Lickliter included and Rory even has a bit which causes his infamous hip stall) that end up here. Lower body leading too much and arms trail the rotation of the body. Why do so many good to great players end up here? It’s very simple. One of my seemingly never ending list of pet peeves is golf instruction aspires to the opposite of bad instead of what is good:

Most beginners start out swinging the club in a classic over-the-top pattern. The arms lead out, they swing across it, and the predictable disasters associated with that move make the game very difficult. So they get a lesson. And they’re told that to fix their over-the-top pattern, they need to:

This moves their path way too far right, creating a two-way miss pattern of big blocks and pull hooks. And if you’re curious what this looks like, take another look at the top image: it’s the 68 ballerina!

EVERY golfer I have told to speed their arms up and get them more forward, couldn’t help but sequence better, even if I told them to temporarily restrict hip movement to get the feel. And the reason is simple:

Experienced golfers will automatically lead with the lower body.

There are all kinds of swing thoughts and feels that can correct the 68 ballerina:

Hacks and beginners should NEVER be told to have passive arms, swing to right field, or any of these other “solutions.”. They do need to learn the pressure shift (bump) if their left hip actually works away from the target, but proper arm and hand movement learning is key.

Beginners and hacks who have the prototype over the top slice action need to learn two things with respect to the arms and hands and how they work:

1. In the backswing they can’t get their arms and hands in too early. That leads to an in, up, out, down motion. Adding some up to the left arm to match the shoulder turn can usually get this straightened out.

Another way to approach the 68 ballerina move is by focusing on a lower body key that can address these problems in a different way. I discuss them in a video here.

The arms are too slow.

How to Actually Fix OTT