Most people DO NOT understand the golf swing 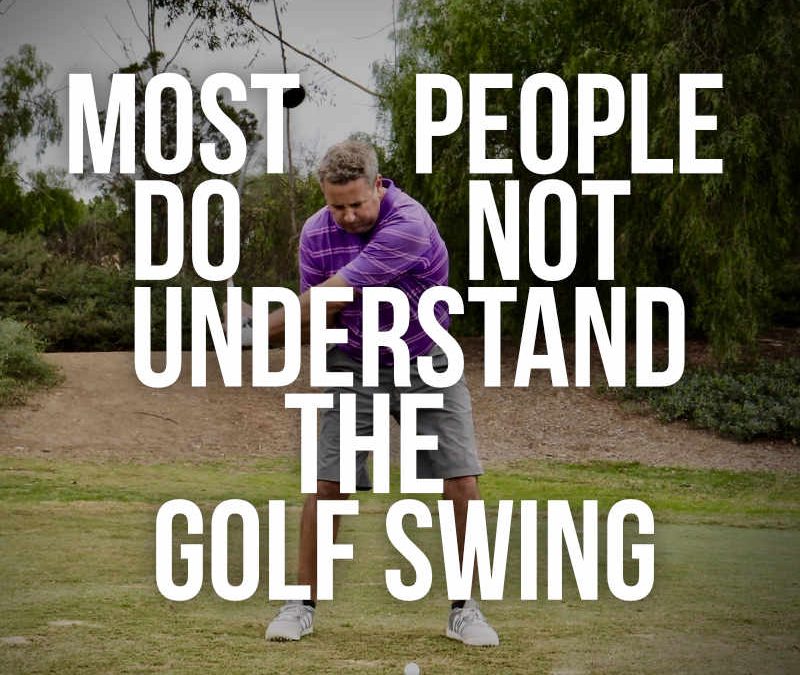 Many years ago, when I decided I was going to get into teaching, I had a lot of preconceptions about the golf swing, and how I thought it was supposed to work. Many of those ideas were completely wrong.  I was actually pretty clueless about the golf swing, so I educated myself. I stood on the range and made different swings to see how things actually worked. Over and over and over again. Every day I found something that mainstream instruction had either largely ignored or had totally backwards.

THERE IS BAD ADVICE EVERYWHERE

Today, I am not clueless about the golf swing. But many prominent people (with much larger audiences than me) unfortunately are. In turn, I often find myself getting frustrated when hearing those people discuss the swing. It makes me especially frustrated for the general golfing public.

For years, I listened to Johnny Miller tell people on TV to try to pull the butt of the club into a wall in front of them.

I heard Peter Kostis proclaim that golfers should go wide-to-narrow in order to increase power, while at the same time saying that wide-to-narrow was the cause of Phil Mickelson’s inconsistency under pressure.

Awful!!!!!!!! No wonder people feel so clueless about the golf swing!

GOLF IS HARD. MANY ARE MAKING IT EVEN HARDER

I see all sorts of golf tips and instructions given out on the range by teachers and range rats alike, and the simple fact is most of this advice leaves out one important concept:

You cannot zero-out positions and movements in the golf swing.

The golf swing is most often two opposing forces working together. And most actions in the golf swing are counter-intuitive. Two good examples:

This is completely counter-intuitive, and a HUGE part of the golfing public (and many instructors) don’t understand it.

You need to have spine tilt behind the ball at impact with an iron to give your arms room to swing, create forward shaft lean (the right way) and hit down on the ball. People argue with me about this every day. I am yet to get a response when I ask them to show me a video of a great player who isn’t tilted behind the ball at impact on a regular iron shot. No one has sent me a video of Ricky Barnes yet.

This is why getting better at golf is so hard. Because the damn game makes no intuitive sense at all.

Feel isn’t real, opposing forces canceling out, and all of this counter-intuitive nonsense makes it hard, especially when making changes to your swing often brings immediate failure.

What makes me mad is that the “experts” are not taking the time to explain this to people. Sometimes I feel like Don Quixote. I don’t want to be presumptuous and say that most of them don’t understand it as well as I do, but I have put in the time, and put these ideas into real trial-and-error situations as both a player and a teacher.

THERE IS NO RIGHT WAY, BUT MANY WRONG WAYS

There is no exact “right” way to swing a club, and that makes it difficult too. Most people like to be told exactly what to do, as opposed to being told what not to do. I have been criticized for spending an inordinate amount of time on video telling people what not to do in the golf swing, as opposed to telling them exactly what to do. I accept this criticism and am working on it, but the reason I do that is no accident. There are a lot of good ways to swing a club, and it’s actually easier to focus on the dealbreakers than on the multitude of good options available. Plus, I am a big believer in the idea that finding your swing is just as much about avoiding the bad stuff as it is about doing what’s right.

On paper, the swing is this simple: Make a consistent swing path, get the club face to match that path and create a decent angle of attack for each club. Of course, in practice, getting there can be an enormous challenge.

HOW I TEACH GOLF

Here is how I focus on making my students better: I find the direction I think an individual should take her/his swing. Then I focus on 3 or 4 basic ideas that will get them there, and finally, figure out how to communicate those ideas to the student in different ways until they get it.

I have produced major improvements in many students working this way. When they finally get it, the common refrain from most of them is something like, “this is about the 20th way you have told me to do this, but I finally understand it.”

I once had a student who was a Division 1 golfer. He was a great player of golf, but his swing had a low ceiling and was preventing him from ever taking a huge leap. This golfer didn’t hit the ball very far. He basically got his upper body in front of the ball, pulled the handle, got disconnected and casted at the bottom to pick it perfectly off the ground. I worked within the limitations of this swing off and on for about 18 months before he finally decided he wanted to take a huge leap and fundamentally change his swing.

It didn’t take that long to drastically improve his swing, but it took him months to get comfortable with it. In the interim, he had days where he hit it 30 yards farther off the tee, straighter and more solid with all the clubs than he did a year ago. And he also had days where he had to hit 5 iron from 150 to whiff it onto the green.

And this is why golf is so hard. First you have to make the right corrections, and then you have to grow comfortable with them. Fighting the urge to say “this feels weird, or powerless, or wrong” is a major part of the battle. Because here is something else that is 100% true 100% of the time: if you make changes to your golf swing and they don’t feel weird, you haven’t actually changed anything at all. So don’t feel clueless about the golf swing. Get a clue and understand that it is hard for everybody.

Too much grip pressure

Feel creates a linked up swing